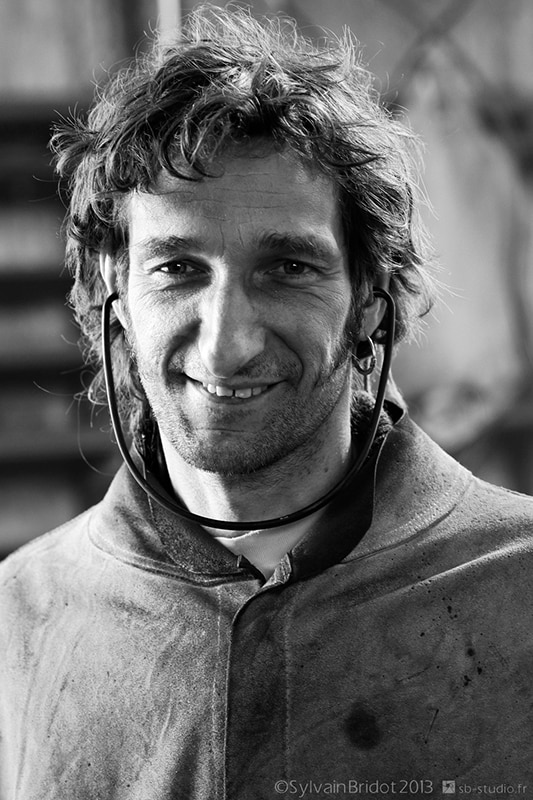 An artist of integrity and respect for nature, Philippe Poulard likes to work with material and more particularly with iron. Created in 2007, Le Fer Savoir illustrates today a large panel of emotions which is reflected through surprising works of art, all as honest and touching as the artist.

A Frenchman from the Rhône region, and more precisely from Amplepuis, Philippe Poulard withdraws himself every day in his studio in Lamastre, Ardèche, in order to let his imagination run free. This creativity takes shape in different ways, day after day, hour after hour. And “taking shape” is indeed the right word when it comes to handling iron. This material, a chemical element with an atomic number of 26, is the favourite material of the artist of fifty years, with a gentle and friendly look.

Although he was a lumberjack in his youth, Philippe Poulard changed his career further to a tragic accident that occurred during lumbering work after the 1999 storm. He was trapped between two trees, immobilized…at the trunk. The doctors were formal: he will never be able to walk again.

This was without the iron will of Philippe Poulard. It took time, but he walked again. He made a promise to himself. And although his job as a lumberjack was no more possible, he is none the less happy: he finally was able to devote himself fully to art. A dream comes true.

But what to do?

Wild and suspicious of the society in which he lives, Philippe Poulard first takes the time to travel around France with his motorbike, before discovering in the Ardèche the place and the social mentality that suits him. In Lamastre, he finds the quietude necessary for his art, but also for his thoughts.

But how does one go from wood to iron? “I needed a sensoriel art, with which I could shape something with my own hands. Iron immediately spoke to me” reveals the artist, who created Le Fer Savoir in 2007. Beyond ironwork, Philippe Poulard likes to specify that he is an art metalworker. A term that, all in all, suits the artist perfectly. “What I like is the exchange with the material, which appears cold and hard at first, then becomes malleable in my hands, to finally come to life.

Between the artist and the material

Philippe Poulard sees the exchange between the artist and the material as consenting and respectful. The artist must accompany the iron on a predefined form, but when the material resists, it is because it has another path to take. Being attentive to it, Philippe Poulard creates true artworks, which sometimes go far beyond his imagination. Working mainly on unique pieces, and with the aim of harmonizing living spaces, the craftsman marvels at discovering the results after hours, even days, of work. “Sometimes I create from a piece of metal with a precise idea in mind, and sometimes it is while handling the metal that inspiration comes to me, following the curve that the metal takes. The results are always striking; I am sincerely touched by what the material has to offer.

Possessing a soul of its own, the material does not leave this man indifferent. In his eyes, each piece of iron, lives its own way and has a vocation that must be perceived. Thus, to complete an artwork between the artist and the material is for Philippe a moment of pure freedom, accomplishment, but also of pride.

Like many other artists, Philippe Poulard has his moments of doubt, need for recognition and questioning. The result is convincing: the works reflect the emotional honesty of its creator. And seeing what takes shape and comes to life in his hands, Philippe Poulard ends up accepting, with a smile, that this is indeed his destiny.

Although lumbering is no longer part of his life, Philippe Poulard likes to integrate wood into his creations. His major work, Horloge Sinueuse, breathes his love for these two materials that are wood and iron. Also, the adventure has only just begun in his eyes, because there are still many materials to combine with iron, such as stones for example. For trophies, sculptures, or garden furniture, everything is subject to the alliance of materials found in the secret woods of the Ardèche.

As for his future, the Ardèche artist sees it not so different from today, with perhaps recognition of his life path, a full satisfaction of his creations and the sale of his works of art. He does not need much more to reach happiness. Humble and modest at the same time, Philippe Poulard seeks neither glory nor success. He is simply looking for self-respect and respect for his art, which is very important to him. Thus, the climax of Fer Savoir, he will celebrate it with his wife and his son, around a good bottle of champagne. Happiness is within reach.

And it is precisely the integrity and respect, dominant parts of Philippe Poulard’s character, that give all the interest to his works. And his art easily reflects this integrity that he cherishes so much. “I like to surround myself with people who understand me and who, like me, are looking for honesty in their art and in their relationships.

Through his creations, Philippe Poulard smiles at the idea that he is generously transmitting emotion, filled with a boundless benevolence and an unwavering respect, both for the work and for others. The other person, the buyer, will be pampered in this personal emotion at each glance on his acquired work. An intrinsic gift from the artist that, with certainty, is worth all the iron in the world.